With the world caught in the vortex of the pandemic, it’s clear that some of the best results to date have occurred in countries that have elected women as their leaders. Indeed, an article in The Guardian bore this headline:

“The Secret Weapon in the Fight Against Coronavirus: Women.”

I find this phenomenon intriguing and have been wondering what lessons might emerge to help us going forward. There seem to be several commonalities among these women.

First, Let’s Look at Some of the Notable Success Stories.

There’s Tsai Ing-Wen, who was elected President of Taiwan in 2016. Although Taiwan is close to mainland China, where the virus first surfaced and rampaged, her rapid actions resulted in fewer than 400 confirmed cases and six deaths out of a population of about 24 million people.

Working with her vice president, an epidemiologist, she ordered all planes from Wuhan inspected when she first heard about the virus in December. She then restricted flights from Mainland China, Hong Kong, and Macau, created an epidemic command center, and increased production of personal protective equipment (PPE).

These efforts were so successful that Taiwan has actually been donating masks to the US and 11 European countries.

Katrin Jakobsdottir, Prime Minister of Iceland, has overseen testing of nearly 12% of her country’s population, a much greater percentage than any other country. She’s done so by collaborating with a biotech company that offers free tests to anyone who wants one—regardless of whether they have symptoms or believe they’ve been exposed to the virus. Iceland also does in-depth contact tracing to locate and isolate people who may have been exposed.

Although there hasn’t been a countrywide lockdown, they’ve banned gatherings of more than 20 people. I’m assuming that with a population of just over 364,000, that degree of testing and tracing inspires some confidence that greater restrictions aren’t needed.

In fact they’ve screened five times the number of people as South Korea. As of April 17, Iceland had 1,739 known cases, with eight deaths.

Sanna Marin, Prime Minister of Finland, is the youngest female leader in the world, at age 34, and has a largely female cabinet. Finland recently increased its testing capacity by 50% and began nationwide antibody testing.

With a population of about 5.5 million, Finland has seen 3,489 cases and 75 deaths. According to The Christian Science Monitor, a Finnish Broadcast reporter said:

“Her performance at press conferences and in parliament has been just what works best for Finns–clear, concise, unemotional; but with an undertone of warmth.”

A recent poll showed that 85% of Finns approve of Marin’s handling of the pandemic.

Erna Solberg, Prime Minister of Norway, announced recently that the contagion curve has been sufficiently leveled so that her country “has managed to gain control of the virus.” She began lifting the strict controls by reopening some businesses and kindergartens. The known incidence in Norway, with a population of nearly 5.4 million, is 6,905 cases and 157 deaths.

Solberg has followed the scientists’ advice in her actions and comforted her people: she said in a news conference that “It’s okay to be scared,” and that she missed hugging her friends, words she felt were especially important for young people to hear.

Jacinda Ardern, Prime Minister of New Zealand, closed the borders immediately, prepared people for self-quarantine, and implemented widespread testing; to date, there have been 1300 cases and just one death in a population of 4.8 million people. The fact that New Zealand is an island has been a factor in her success, but Ardern has also received high marks for the clarity of her leadership and her compassion.

She’s appeared in streaming videos at home, reassured kids that she counts the Tooth Fairy and Easter Bunny as “essential workers,” and announced that she and her cabinet would take 20 percent pay cuts for six months. She’s been said to demonstrate that a head of state “can actually lead with both resolve and kindness.”

And then there’s Angela Merkel, Chancellor of Germany. There have been more than 148,000 infections among its 83 million people, but very low deaths per million (fewer than 5000 as of April 17)—considerably lower than other European countries. Germany has the most large-scale testing program in Europe and the most intensive care beds.

Merkel’s popularity has skyrocketed because she’s handled the crisis so well. She told the public:

“I’m absolutely sure we will overcome this crisis. But how many casualties will there be? How many loved ones will we lose?…We are a community in which every life and every person counts.”

Merkel, whose title is chancellor, has a doctorate in quantum chemistry.

Why Have These Women Been So Successful?

According to The Guardian reporter,

It seems fairly obvious that what makes a successful leader is a combination of strength, effective decision-making, and compassion. That doesn’t necessarily describe a woman.

New York Governor Andrew Cuomo’s reputation has soared, despite the delay in aggressively confronting the threat, because his tough guy persona has been substantially softened by what appears to be genuine compassion.

But the effective women leaders are the result of a specific environment, says Kathleen Gersen, a sociology professor at New York University.

“Female leaders are also likely to be nourished and supported within societies that themselves have a certain culture.”

“If you have a political culture in which there’s a relative support and trust in the government, and it’s a culture that doesn’t make stark distinctions between women and men, you’ve already got a head start.”

She also thinks that women who reach such lofty positions feel less tied to traditional methods of leading.

“There are so many ways that men are expected to behave when they’re leaders that I think it sometimes makes it difficult for them to step over those boundaries and act in a different way from the norm.”

Though Gersen offers Governor Cuomo as an example of this breakthrough, we’ve seen one terrible—and several poor—examples of male leadership, or lack thereof, that involved differing from the norm.

These bad examples show us in the negative why the ways the women have acted have been successful.

In fact, the pandemic forces leaders to face the vastness of unknowns, so they must rely on their inner strengths and creativity more than on existing norms. They have acted promptly and forcefully.

They have also sought expert advice and relied upon the science. And, importantly, they have brought along the people they serve by communicating with them with honesty, clarity, and compassion.

If, Gersen says, women leaders can demonstrate that strength and compassion are not conflicting traits—that they actually complement one another and are both essential for good leadership,

“I think not only will society benefit. but so will men. Maybe then we can begin to open up the scripts for roles that leaders play”—regardless of gender.

What do you think? Women presently make up only 25% of the world’s leaders, but they’ve been the shining lights in this darkest of times.

Do you agree with Kathleen Gersen’s belief that women succeed where there’s relative support and trust in government and not the stark distinctions between men and women?

If so, what does that assessment say about our future in the US—or wherever else you, my thoughtful readers, reside?

END_OF_DOCUMENT_TOKEN_TO_BE_REPLACED 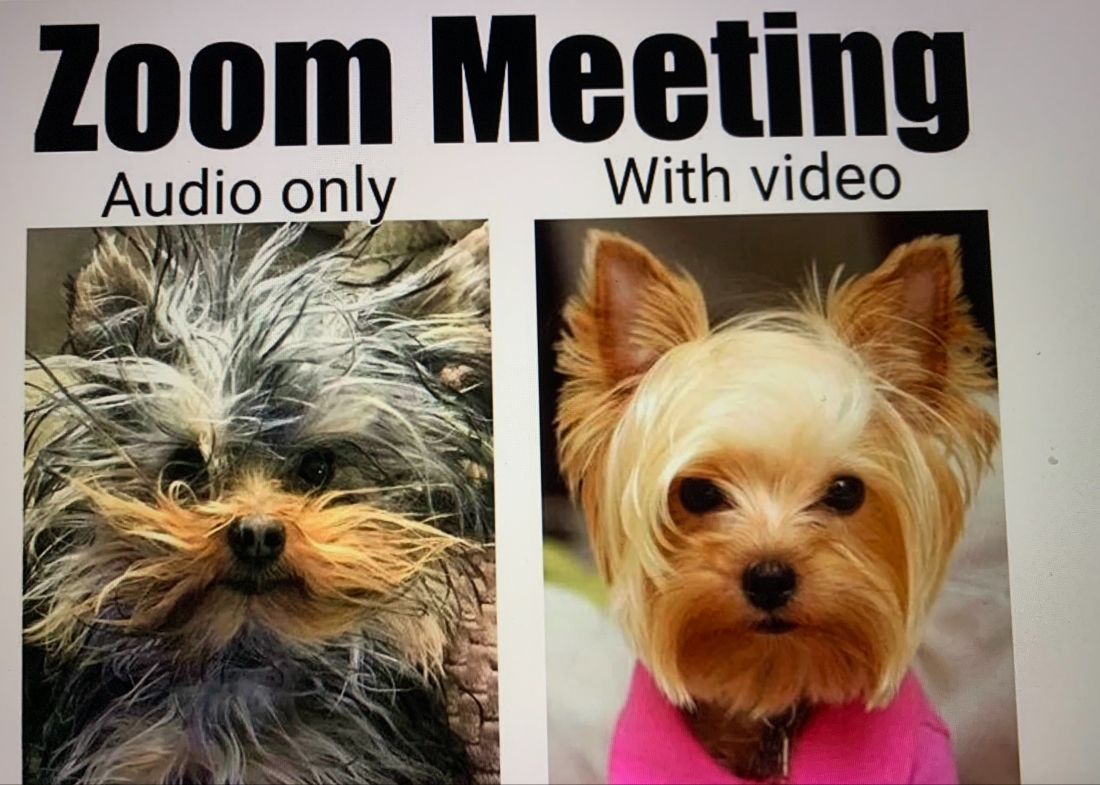 I guess I’m making a large leap in assuming that a) you haven’t seen this photo before; and b) you’ve had the Zoom online experience that so many of us have been introduced to in this time of social distancing.

At any rate, this image makes me laugh, and I hope you’ll enjoy it too. Even if you haven’t “Zoomed,” with so many of us worldwide living in isolation, I can tell from various posts that there have been some pretty weird changes in our daily routines. For example: It’s 5 pm. Is it really necessary for me to exchange my pajamas for sweat pants and a T-shirt?

I send good wishes to you all, and hope things are as pleasant as possible as we make our way through the specter of the pandemic during this time of Easter, Passover, Vaisakhi, Vishu, the Bengali and Tamil New Years, the Buddhist Theravada New Year, and Spring.

(I just learned that one of the traditions of Theravada is to build sand castles, with the belief that the waves’ washing away the effort symbolizes the removing of one’s mistakes and enables personal renewal. It’s a reminder of our impermanence, which by coincidence was my theme when I wrote this poem quite recently.)

All these occasions call forth the hope for better days ahead–something that whether or not we follow a religion is sorely needed these days. I am especially thinking of those among us who are in pain, mentally and/or physically, or have suffered a loss.

Though we’re separated, we know what we must do to speed the process that will enable us to emerge from this pandemic and be together once again. To that extent, we do have a measure of control, even if it seems that events have overtaken us.

And then, I fervently hope, we can begin the important efforts to work together–locally, nationally, internationally–to make this a more just world, where we care for one another, ensure that extra attention and resources are provided to those who have been hardest hit,  and at last give Mother Nature her due.