The front page of Sunday’s New York Times and the story within carry snapshots of the 126 most recent victims of mass shootings. “Inside a Deadly American Summer,” reads the page 1 headline. “An American Summer Stained in Blood,” is the inside title.

Both tap into the fear, anxiety, even terror that the overwhelming majority of us feel about mass shootings. “And all we could do is ask why,” notes The Times. “And wait for it to happen again.”

What if I told you that the media’s approach to these clearly horrendous mass shootings, which are increasing in number and frequency, may actually be making us less safe?

Suppose we are viewing the issue of gun violence through too narrow a lens—and we are therefore standing in the way of what could be real progress in reducing and preventing the deaths and serious injuries in our gun culture-run-wild?

A friend who spends a great deal of his time trying to make us all safer by volunteering for a prominent gun control organization alerted me to a most informative segment of NPR’s program On the Media. I’m linking to it here, but for those who can’t listen to the entire discussion, I’m also summarizing it (with some added references).

The segment is titled “How to Report on Gun Violence in America.” The host, Brooke Gladstone, interviewed Lois Beckett, a senior reporter for The Guardian, who has been covering gun violence for seven years.

Gladstone began by quoting journalist Margaret Sullivan, who said that whenever a mass shooting occurs,

“we reflexively spring into action. We describe the horror of what happened, we profile the shooter…we talk about the victim’s lives…we get reactions from public officials.”

This is gut-wrenching work, she says. But…

“If journalism is supposed to be a positive force in society, and we know it can be, this is doing no good.”

And that’s a problem.

Beckett says the same thing, perhaps more emphatically. Media reporting of mass shootings is misguided, she says. Even now, these rampages account for 1%-2% of all gun deaths. They’re so dreadful that they’re making us view our institutions and ourselves differently—and to take what may be the wrong steps in reducing gun violence.

Almost 2/3 of gun fatalities result from suicides, she points out. And many other victims are caught in “everyday” shootings in poverty-stricken segregated areas in cities.

With the focus on mass shootings, “We’re trying to prevent 1% from dying and not caring about the other 99%.”

Beckett credits the Parkland students, who rose far beyond the trauma of their own ordeal to call attention to the fact that “America’s gun debate has been racist for decades.”

According to statistics reported by Everytown Research, black Americans are 10 times more likely to die of gun homicides than are white Americans.

The situation is untenable, and these awful crimes are committed by only a small proportion of individuals in these areas.

So we know that if we’re serious about preventing gun violence among those most affected, the media must draw our attention to approaches that actually help people at risk for suicide and/or living in poverty-stricken segregated areas.

And though suicide is a mental health issue, guns are a critical component: Everytown reports that access to a gun triples the risk of death by suicide, gun suicides occur mostly in states where there’s heavy gun ownership, and guns increase the fatality of a suicide attempt dramatically: less than 5% of suicide attempts succeed when a person doesn’t use a gun, but 85% are lethal when guns are used.

In her work with The Guardian, Beckett and colleagues have been exploring efforts that have made a difference in poverty-stricken areas, and she points to some “tremendous programs at the state level” that need more visibility to push back against the immobilizing views that nothing is possible; nothing can be done.

The Guardian is giving those efforts more visibility, and I found them so encouraging that I’ll describe them in Part 2 of this post.

“Looking at the big picture,” Beckett observes, “we need a real public health approach.” That’s a position that physicians’ groups and others have been advocating for years.

Beckett didn’t elaborate on this point, but my understanding is that a public health approach must begin with sufficient funding to yield solid data (that doesn’t solely rely on the Centers for Disease Control (CDC), as Brady, the oldest gun violence prevention group, has explained), and include background checks, banning assault weapons and the magazines and ammunition that enable the quick, devastating damage we’ve seen, and other interventions that we have reason to believe will be effective.

We know, for example, that banning assault weapons works because we had such a ban from 1994 until its expiration in 2004.

Beckett says she looks for legislation based on policies with science behind them, such as red-flag laws that depend on the judgment of people closest to the person at risk: law enforcement, social workers, schools, parents—laws that don’t remove a person’s gun rights forever, but try to line up with what’s happening now. Some states have already enacted such laws.

She says that although these proposals, which have support among some conservatives, have gained attention because of mass shootings, they can also help with many people who might be in danger of harming themselves or others—the 99% noted earlier.

One positive that has emerged from these dreadful mass shootings, she feels, is the numbers of white suburban parents getting involved in the gun control movement—and learning, for example, that homicides of black children often occur in circumstances different from what they expected.

I’m assuming she means that in so many of these fatalities, the child is doing nothing wrong—is simply in the wrong place, is the victim of mistaken identity, or other tragic situations.

Beckett cautions that advocating for the wrong thing is extremely dangerous. She believes almost all the efforts to make schools safer are having the opposite effect. This comment led me to further research.

In The Conversation, three researchers discuss efforts that have been called “target-hardening”:

The researchers, who have collaboratively written about these approaches elsewhere, point out that surveillance cameras didn’t stop Columbine, and school lockdown policies didn’t save the children at Sandy Hook.

“We believe what is missing from the discussion is the idea of an educational response. Current policy responses do not address the fundamental question of why so many mass shootings take place in schools. To answer this question, we need to get to the heart of how students experience school and the meaning that schools have in American life.

“An educational response is important because the target hardening approach might actually make things worse by changing students’ experience of schools in ways that suggest violence rather than prevent it.”

All these target-hardening methods tell students that schools are “scary, dangerous and violent places,” the researchers say. And they may lead teachers to begin assessing students “not as budding learners, but as potential shooters…The more teachers think of students as threats to be assessed, the less educators will think of students as individuals to nourish.” 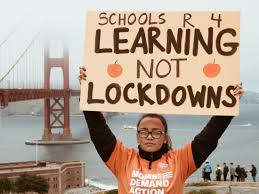 Beckett believes the press must focus on the things that readers or listeners have the power to do. They need to think more about providing information for people who are worried about someone close to them and don’t know what to do. She believes that:

“The biggest enemy is not the NRA: it’s cynicism and exhaustion of everyday Americans who don’t see evidence of help.”

When Gladstone asked Beckett how she felt about the Walmart CEO’s determination to no longer sell assault weapons and ammunition, Beckett observed that Walmart had actually stopped selling handguns in 1993.

“Walmart’s policies on the dangerous threats are more in line with data than our whole debate is.”

She added that actions like Walmart’s do matter, and change is possible. Gun owners are a minority in the US (and many of them now support gun safety legislation). Seventy to 80 percent of Americans don’t own guns, and 60% live in homes with no guns.

“It’s important to recognize that extreme gun absolutists are fewer than 10% of gun owners”—a very aggressive group, but a small number of people.

“If even a small number with a different view can organize against them, they can change the debate. It’s taken a long time, but we’re seeing it happen now.”

Unquestionably, these mass shootings have increased, and they have caused an enormous level of fear and anxiety. The danger Beckett finds is that the reflexive focus on these shootings is leading more Americans to arm themselves—which could result in more suicides and domestic violence (as well as accidents). “Our fears are going to make us less safe.” To counter that, she says,

“We need to remind ourselves to de-escalate and trust each other and not be afraid.”

Please join me next week when, in Part 2, we explore programs that do just that.

31 thoughts on “About Those Guns…”