I have a few friends who are medical nihilists (several of them are married to physicians). They avoid medical care whenever possible, rarely see a physician, and when they go, generally ignore the physician’s instructions.

I am cut from a different cloth. I go to the doctor for preventive care, get my flu shot every year, and seek medical guidance if I’ve had a problem for more than a few weeks.

I do have several chronic conditions and a bionic knee and wrist. However, I am fortunately, at this point, in good health. (Cue my late mother’s voice here, making clucking sounds to ward off the evil spirits.)

I tend to be super vigilant about medical matters. In fact, as I’ve written previously, I tend to catastrophize. That sudden pain in my leg? The one that’s probably a pulled muscle? Well, it feels hot, so it could be a blood clot, couldn’t it? (I also meditate, but sometimes the worry forces overwhelm the calmness regimen.)

And, having worked as a medical writer/editor in the past, I realize that I possess just enough medical knowledge to be a danger to myself and others. (I do, however, refrain from prescribing–and for the most part avoid misdiagnosing my friends and family.)

Although it’s gotten worse in recent years, as those around me have died—or narrowly escaped death—this tendency on my part to focus on all things medical has been ever so.

I think I’ve known the seven warning signs for cancer since I learned to read. For those who don’t share my fixation, the first sign is “Any sore that does not heal.”

But the tiny mark on my nose seemed insignificant—certainly not a sore as I understood the term. Occasionally, a little dry skin flaked off and the skin beneath looked slightly pink; then it quickly returned to its previous state. I found it curious, but not at all alarming. This went on for months.

One night, when the spot looked pinkish, I dabbed it with a little cortisone cream that my dermatologist had given me for a previous condition.

Shortly thereafter, I stepped into the shower. When I stepped out, I caught a glimpse of my face in the mirror, and blood was gushing from that tiny spot on my nose—it seemed like several tablespoonfuls.

My dermatologist saw me the next day. “It doesn’t look like anything,” she said, poring over it with her magnifying glass. “But whenever there’s bleeding, we do a biopsy.”

The biopsy was definitive for carcinoma, but wishy-washy as to type. At varying times I was told it was a basal lesion with some squamatization, a squamous lesion, or a “collision lesion” of both cell types. The latter made me envision two small bumper cars packed with differing cells, going at each other at high speed.

One point was certain: the innocuous looking thing had to go. I was referred to a Mohs surgeon for a procedure in which the lesion is removed layer by layer while the patient waits for the biopsy report stating that the margins are clear: the cancer is gone.

At the pre-op visit, the surgeon’s nurse drew a fairly large circle around the lesion with a green marker pen. That should have alerted me to what was ahead; it did not.

The surgeon explained her procedure and then said, “I think we should have a plastic surgeon on standby to close the wound.”

I was puzzled. It was so small—surely a few stitches would do. Then she said, “You have a fine aquiline nose; I think it’s wiser to have a plastic surgeon do the closure.” OK. The plan was that I would see a surgeon she works with on such cases; she’d complete her work, bandage me up, and he’d close the wound later that day. Seemed reasonable.

But when I met the plastic surgeon pre-op, he began describing what sounded like pretty dire procedures. “We can take a skin graft from another part of your body that’s close to the color of your nose,” he said. “Or we can do a flap from your forehead.” All of a sudden, this tiny lesion was wreaking outsized havoc on my face.

I spoke with the Mohs surgeon’s nurse, who assured me that the plastic surgeon gave “worst possible scenarios.” I felt better—for a time. I had agreed to the graft, if needed, because the plastic surgeon said if I didn’t like the results, he could always do the flap. But once the flap was done, no revision would be possible.

Fast forward: the cancer was gone after a single layer’s removal: very good news. The plastic surgeon told me to come right over. He looked at the wound and said, “We’ll take a graft from your clavicle; do you mind a scar?”

I was willing to forgo a pristine clavicle for a chance that my “fine aquiline nose” wouldn’t be seriously disfigured. I will acknowledge that my attachment to it has been more than physical and utilitarian.

I was awake through the surgery, and we all laughed at the surgeon’s stories of his parents’ youthful indiscretions. Not sure why he raised that issue, but it did pass the time and take my mind off the snipping and sewing.

He had warned me the healing would take about a year, so I’m more than three-quarters of the way there. There have been bumps along the way—just recently, one quite literally.

I was walking through a revolving door and, certainly not practicing my mindfulness, stepped ahead before the opening had reached me—like a tiny bird ramming into a window. The only part of me that hit the glass was my nose—straight on.

I began icing it as soon as I could and called the plastic surgeon’s office to see if I should do anything else. He returned my call in minutes—an unusual attentiveness that suggested concern.

“In a battle between a door and a nose, the door always wins,” he said brightly. (He’s a good surgeon, but I didn’t need the wisecrack.) “Do you think it’s broken?” he asked. I said I really didn’t think so; it didn’t hurt that much and was simply quite red. “Keep icing it on and off all day,” he responded. “It should be OK.”

The next day, when I awakened to find the skin graft in place and not beside me on my pillow, I appreciated how fortunate I was not to have damaged myself seriously.

Now that I have a portion of my clavicle attached to my nose, I’ve thought about whether it’s still appropriate to call it a nose. It seems more like a hybrid of two heretofore autonomous body surfaces, finding their way to peaceful coexistence.

It’s a strange phenomenon, but I profoundly recognize that in the scheme of things, so many people struggle with far worse medical conditions for many years. I’m very grateful for my situation and do, mindfully, appreciate every day.

Some mildly annoying lifestyle changes go with this new territory. I’ve had three squamous lesions in less than two years (two were in situ—precancerous), of which two were on my face. Thus, I’ve been warned by both the Mohs surgeon and my dermatologist that although the skin damage happened years ago, I must now take extra precautions: sunscreen (more than 30 SPF) all year round, rain or shine; hats with brims; sunglasses; and long sleeves.

In this 90 degree heat, I get some strange looks, but so be it. A woman of mystery–perhaps a secret agent, who has traded her traditional trench coat for UPF (ultraviolet protection factor) garments.

So ends my cautionary summer tale for you—especially those who are young and carefree. Just one or two bad sunburns can do a lot of damage, and mine occurred before we were worried about losing the protection of the ozone layer.

Don’t be cavalier about your exposure to the sun. And please: don’t ignore any small lesions, no matter how innocuous they may appear, if they hang around for a while. 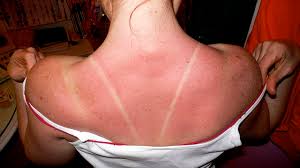 One more thing: if you’re even thinking about going to a tanning parlor, fuggedaboudit!

31 thoughts on “A Cautionary Summer Tale”