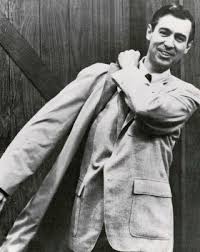 I see a direct line between two recent bits of news. Here’s the first: “America Really Is in the Midst of a Rising Anxiety Epidemic,” headlines a Science Alert published in May. Reporting on the findings of an American Psychiatric Association (APA) Public Opinion Poll, the author writes: “If you’re feeling stressed, uncertain about what the future holds, or even physically unsafe, try not to panic—you’re definitely not alone.” https://www.sciencealert.com/americans-are-in-the-midst-of-an-anxiety-epidemic-stress-increase. Anxiety about health, safety, and personal finances topped the list of those responding to the APA poll—with percentages in the high 60s for each—while 56% cited the impact of politics on their daily lives. Nearly 40% said they felt more anxious now than they did in 2017. https://www.psychiatry.org/newsroom/apa-public-opinion-poll-annual-meeting-2018.

And here’s the second: Won’t You Be My Neighbor?, the lovely, gentle film about Fred Rogers, a soft-spoken Presbyterian minister whose Mister Rogers’ Neighborhood series on PBS uplifted and reassured a generation of children and their parents, has raked in more than $20 million since its June 8 opening. That figure makes it the highest grossing biographical documentary—and one of the top 15 nonfiction films—of all time. PBS plans to show it early next year.

In addition, Tom Hanks (who else?) will star in a film titled You Are My Friend, reportedly based on a real-life friendship between Fred Rogers and a tough-minded journalist who, obligated to do a profile of Mister Rogers, found the experience transformative. The extraordinary profile by Tom Junod appeared in Esquire in 1998 and was reprinted last year. https://www.esquire.com/entertainment/tv/a27134/can-you-say-hero-esq1198/

I’m not suggesting that Mister Rogers, even in his persona as the benevolent despot King Friday, could perform miracles in these troubled times, serving as a balm for all that ails us. One of the most difficult parts of the film for me was the noisy picketing of his memorial service by anti-gay activists enraged by his tolerance of gay people. And he clearly suffered a sense of inadequacy in trying to explain events such as 9/11 and Bobby Kennedy’s assassination to his young viewers.

But I wonder how he would deal with some of the sources of Americans’ anxiety today. One finding of the APA poll was that 36% of respondents are “extremely anxious” about “keeping myself or my family safe.” Of great interest to me is that when all participants in the poll were asked whether they agreed or disagreed with the statement “Gun violence, including violence from mass shootings, is a public health threat,” 87% either strongly or somewhat agreed. Similarly, 85% strongly or somewhat agreed that “Congress should do more to address the issue of gun violence, including violence from mass shootings.”

How would Mister Rogers talk to children about school shootings? I’m sure he would have found a way, perhaps including his oft-quoted guidance: “When I was a boy and I would see scary things in the news, my mother would say to me, ‘Look for the helpers. You will always find people who are helping.’” (In the Esquire profile, Junod does describe Mister Rogers’ reactions following a school shooting in West Paducah, Kentucky, in 1997, pre-Columbine, when such a horror was an isolated case.)

And would he have felt compelled to take a public position on the matter? Thinking of the extraordinary moment when, through the force of his quiet personality, he persuaded a skeptical Senator John Pastore of Rhode Island to agree to a $20 million grant to fund public television, I wonder how Mister Rogers might have been received if he’d requested permission to testify before Congress about ways to prevent gun violence.

Would he have been permitted to testify? Would his words have broken through the partisan divide and moved legislators to action? So much of his testimony before Pastore’s Senate subcommittee resonates today that it’s worth viewing and re-viewing. This is the link: https://www.youtube.com/watch?v=fKy7ljRr0AA.

Here’s where I see the two items I began with converging. It’s true the APA survey was just one poll, a representative sample of 1004 US adults, but 33% identified themselves as either Republican or leans Republican, 41% as Democrat or leans Democrat, and 23% as Independents.

Numerous other sources also attest to both our nation’s heightening anxiety and broad public interest in government’s role in combatting gun violence. So in our highly polarized society, I derive some comfort from seeing that in at least some circumstances, we Americans have more in common than we tend to believe is the case.

That brings me to the remarkable success of Won’t You Be My Neighbor? I’m not sure if there’s any way to find out the demographics of those who are flocking to see it, but I do know that its director, Morgan Neville, has been traveling around the world in an effort to discern why his film has affected people so deeply, “and it’s not just the usual liberal arthouse crowd,” writes Anne Thompson in IndieWire. https://indiewire.com/2018/07/wont-you-be-my-neighbor-documentary-fred-rogers-morgan-neville-oscars-1201978654/.

Neville told Thompson that he was prompted to make the film about Mister Rogers when he thought about his childhood and wondered “Where are the grownups in our culture? He was the consummate voice I’d been craving…He was empathetic, he was looking out for our long-term well-being. It was more: ‘How can we have a cultural conversation with his voice in it?’ It was not about the man, but about his ideas.”

When the APA President, Anita Everett, MD, presented her organization’s findings about our anxious nation, she said the poll “highlights the need to help reduce the effects of stress with regular exercise, relaxation, healthy eating, and time with family and friends.” I’m sure that’s sound guidance, but I also think it’s incomplete.

And what’s missing is what makes me feel encouraged by the responses to Won’t You Be My Neighbor? and the APA poll’s questions about gun violence. They both show what seems to have been misplaced these days and, I believe, we would do well to emphasize: the commonality of our needs as human beings.

I say this while readily acknowledging that there are, and always have been, some among us who are beyond the reach of this concept. But I believe their voices have been amplified beyond their numbers.

“Rogers understood that on some level all any of us wants is to know that we’re okay,” writes Todd VanDerWerff in “9 times Mister Rogers said exactly the right thing,” published in Vox. “And because he was so good at seeming to believe everybody was, indeed, okay, he could connect with our need for empathy and hope.” https://www.vox.com/culture/2017/5/23/15681060/mr-rogers-quotes-mister-rogers.

In the IndieWire interview, Morgan Neville says: “I wanted to make a film to remind people about the value of radical kindness…It’s this idea that kindness is not a naive notion like believing in unicorns and rainbows or something. It’s like oxygen: it is vital, and needs to be nurtured.”

Mister Rogers has shown us the way. Without him, I believe, while it’s fine to search for the new “grownups in our culture,” I can imagine Mister Rogers handing out lots and lots of mirrors, so that we can accept, and act upon, the knowledge that the responsibility falls on each of us.

15 thoughts on “Mister Rogers: Where Are You When We Need You?”