Thirteen years ago, a tiny white kitten slipped through our backyard fence and adopted Vick, our male collie/shepherd mix, as his “mom.” He’d trot after Vick wherever the dog went, struggling to keep up with him, and nuzzling him whenever possible. Vick, whose gentle nature belied his large size, was gracious and accepting of this feline interloper.

When torrential rains came, we moved the kitten into our garage while we pondered what to do with him. Keeping him was out of the question: we were unabashed dog lovers, but cats were different. I could tolerate them (and who can resist a kitten?), but my husband was emphatic: “I hate cats,” he said.

That was then. Now, having recently euthanized our beloved, very large cat, who’d become extremely ill and deteriorated quickly from a lymphoma, we are both slowly adjusting to his absence and to the void that absence created. But Monty has also left us with some fresh insights about reexamining preconceived notions, exploring the potential for human/animal communication, and opening our hearts and accepting a new source of wonder.

We had arranged for our dog walker, a veterinary assistant, to find a home for the kitten—if we promised to take him to the vet for his shots. We agreed. The tide changed one evening when we were out to dinner with friends who had two cats. They knew I’d been lobbying for another dog. We had our “main dog,” but I also wanted what the humorist Dave Barry has called “a small, emergency backup dog.” Our friends said, “Why don’t you just keep the kitten? Cats are great.” I assume the idea had been floating in my husband’s mind, because he turned to me and asked, “What’ll we name him?”

We named him “Monty,” after Monty Woolley, an actor who had played the title role in the play “The Man Who Came to Dinner.” Woolley’s character arrived, and stayed, and stayed. So did our Monty. 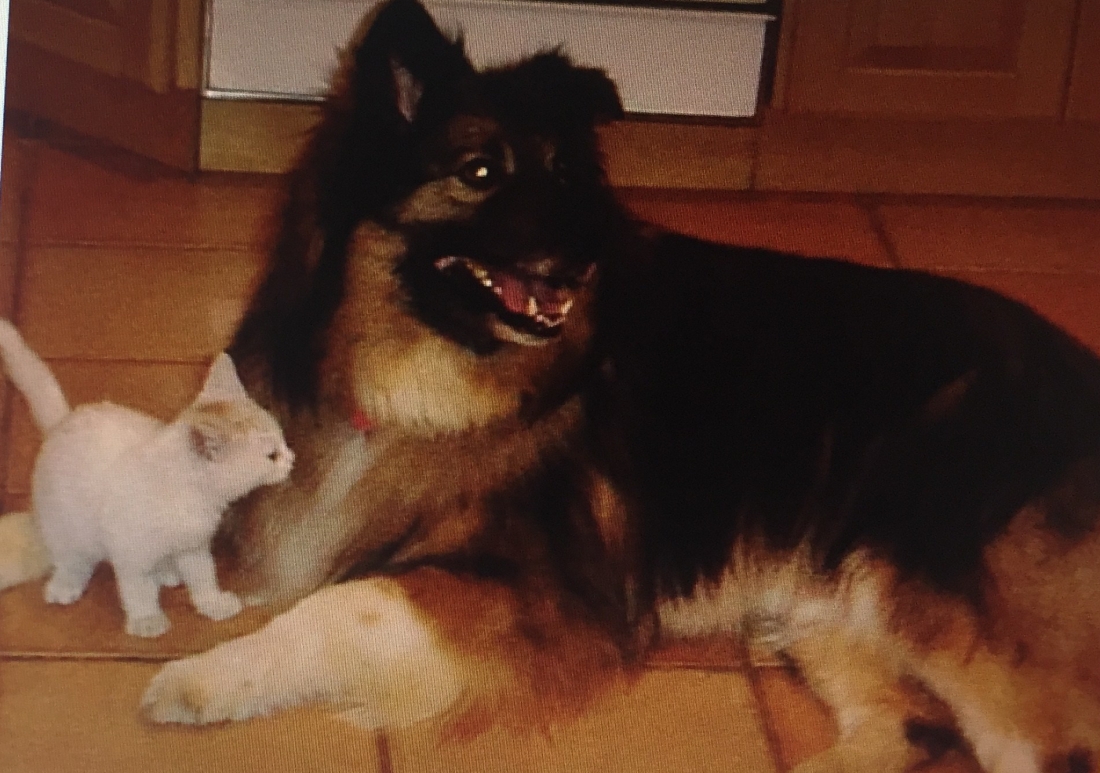 Fortunately for us, and perhaps because of Vick’s influence, he was a rather doglike cat—sweet, gentle, and affectionate, happy and purring, and in the years before Vick died at age 16-1/2, perfectly content to roll around and wrestle with his 80-pound companion. He was a well-adjusted indoor cat that seemed to lack any predatory instincts: on the few occasions a field mouse scampered across our kitchen floor, he remained uninterested.

And he became my cat-hating spouse’s cat: An early riser, he fed him, and it was he who cut Monty’s nails, stroking him gently between clips as he said, beaming, “I hate cats; I hate cats.” From my bed in the early morning, I could hear them having what sounded like conversations. Monty didn’t just “meow’: he vocalized, and he had a lot to say—often. Unlike with the companion animals that preceded him, Monty and we just seemed to understand each others’ vocalizations on a whole other level.

His ashes are now buried in our backyard, next to those of his buddy Vick. Though we miss our daily conversations with Monty and thought we’d have many more years together, we are grateful for the happy accident that led him, thirteen years ago, to wriggle his tiny body through our fence and awaken in us both a new capacity to love.

Note: I wrote this piece at the close of a course I’d taken in mindfulness: our final assignment was to bring in something we found meaningful. When several of my fellow participants came up to me afterward and said, “My husband also says he’d never have a cat in the house,” I began to wonder how widespread this sentiment is—and whether it’s gender-related. Many people love both cats and dogs, but other animal lovers choose sides, sometimes zealously, and perhaps stereotyping people whose animal choice differs from their own.

Our experience with Monty also led me to wonder whether it might be a little parable about how willing we are to challenge ourselves more broadly—not only about cats, dogs, and other animals, but also about the people we meet. In these woefully polarized times, can we/will we/do we ever reexamine our preconceived notions based on race, religion, gender and sexual orientation, and the very sticky, difficult issue of political attitudes? If so, how do we do that? Your thoughts? Examples? Please leave a reply below. Note: If the “Leave a Reply” box isn’t visible, click on the title of the posting above (“About Cats, Dogs, and Preconceived Notions”), and it will appear–all the way down, below the previously posted comments.

And if you’d like to share stories about your own companion animals–their distinct natures and/or your bond with them–I’d love to hear those as well.

ADDENDUM: Since posting this blog a little over a week ago, I have set to work designing a Home page. (I’ve no idea how long it will take my non-techie self to pull that together.) As I went through Google images seeking appropriate selections, I noticed two very familiar photos: Vick and Monty, just as you see them above, have been reincarnated in the vast universe of cyberspace.

How did they get there? At first I thought it was done by WordPress, but I learned that the photos had, in fact, been swept up by Googlebot, which is using the Google search engine to index my site, with its images, and make it searchable for others. If I didn’t want the photos on Google images, I could either remove them from my blog or bar Google from my site. Neither option appealed to me, so Vick and Monty remain available to anyone who cares to adopt them photographically.

As I love the photos and our memories of our boys, I am actually quite pleased with this turn of events–and amused that while I’m slowly building a community with my blog, Vick and Monty probably now have a fan base in the thousands.

25 thoughts on “About Cats, Dogs, and Preconceived Notions”